A FEW FACTS ABOUT ITS HISTORY


The remains of forts and walls, as well as the artefacts dating back to the Antiquity, indicate that the Island of Čiovo, on the western side of which there is the present-day Municipality of Okrug, was already inhabited in the prehistoric times.
During the period of the Roman Empire it served as a shelter for the exiles, and in the 5th century it also became an eremitic retreat. If we exclude the religious hermits who used to live next to picturesque churches that may still be seen today, during the second half of the early Middle Ages the Island was not inhabited. The situation changed in 1451 when, due to ever more frequent Ottoman sieges, the Republic of Venice, under the dominion of which the Town of Trogir had been since the year 1420, allowed the population of the Dalmatian interor to settle onto the nearby islands.

Patron Saint of Okrug
and Venice

The islet served as the king's hideout 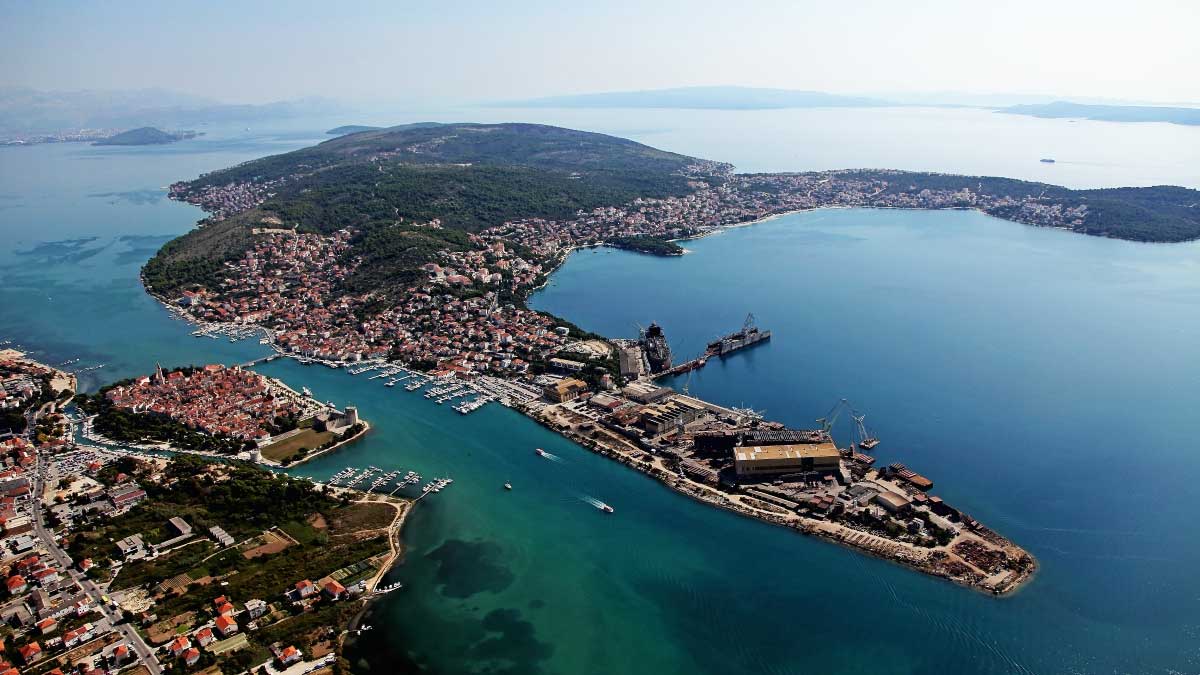 THE BRIDGE TOWN AND OKRUG

HAVE THE SAME PATRON SAINT.

Historians have traced the origins of the Town of Okrug into the beginning of the 15th century and the Church of St. Tudor, next to which there is the old village graveyard.

St. Theodore, renamed by the locals as St. Tudor, has been celebrated as the patron saint of the Municipality of Okrug to whom the believers ascribe healing powers to this day.

Interestingly, the Town of Okrug is sharing its patron saint with nothing less than
the "Adriatic Queen" – Venice
because St. Theodore was elected as the patron saint before St. Mark, and as the second patron saint of the "Bridge Town", it is being celebrated today.

Picturesque churches which have been available for sightseeing since recently, as well as the noblemen's summer residences, have left a mark on the history of Okrug.

The summer residence of the Andreis family at the Bay of Toč, dating back to the year 1655, is among the most popular ones, and the very Bay of Racetinovac was named after the Racettini family whose summer residence was built at the Pantera Bay.

The two islets – the one of Kraljevac and the one of St. Euphemia, are particularly important for the Town of Okrug.
The very Island of Kraljevac was probably the hideout of Bela IV, the King of Hungary and Croatia, when fleeing from the Tatars in 1242, owing to which, according to traditon, the Islet was named.
While the Islet of Kraljevac has saved the life of a king, the Islet of St. Euphemia, popularly known as Umija, has preserved the remains of the Church of St. Euphema, dating back to the Late Antiquity and Early Middle Ages, next to which there used to be an estate belonging to the Benedictine monks of the Town of Trogir.

Although it belongs to the village of Žedno, the Church of St. Maurice (cro. Crkva Sv. Mavra) is also worth mentioning, after which the Bay of Mavarčica, one of the most beautiful and the most popular bays of Okrug was named.

The Romans used to call it BUA, but due to the lack of scientific evidence, as well as of physical evidence, the origin of the name of the Island of Čiovo is still the subject of debate, and the scholars are still facing a dilemma.
However, several well-known theories have emerged, the most probable among which is the one by Petar Skok, a prominent lingust, who claims that this toponym originated from the possessive adjective of the name Vučina, who was a Duke of Trogir and owned the parish of Drid on the Island of Čiovo.
Namely, although in the documents from the Middle Ages, written in Latin, we can only find the old names of Čiovo, such as BUA, BOA, BOVA, adopted by the Romans, and later by the Italians as well, the linguist explains that they were not adopted by the Croats since they could not have heard them beng mentioned from anyone there - namely, the Island of Čiovo was uninhabited until the Ottoman invasion, so when the Croats settled on the Island during the invasion, there was no one there from whom they could have heard its old name.

According to tradition, there is also a version according to which the name of the Island originated from the question: "Whose is this?" (cro. Čije je ovo?), which used to be asked frequently since in the 14th century the Island was divided between the towns of Split and Trogir, so this question was probably heard a lot upon the setting up of the borders.

However, in order for them to be able to accept this theory as a reliable one, the linguists have been stressing the need for this theory to be further analyzed so as to be able to gather as much relevant information as possible.

Unlike the mysterious origin of the name of the Island of Čiovo, the etymology of the name of the Town of Okrug is very clear. P. Šimunović, an academic, claims that the name Okruk is mentioned as early as 1228 (terram de cruco ecclesiae sancti Mauri), and that this information was used to determine the name of the Town. He dismisses the theory of J. Roglić, presented in the Croatian Encyclopedia, according to which the Town of Okruk was named after the protruding promontory on the western coast of the Island of Čiovo, stating that it is derived from the word krug (cro. circle) meaning "heap, stone, reef".

Due to the incorrect pronunciation of the final phoneme among the locals, the name has obtaned its current form, as we know it today. There is also an interesting theory present within folk etymology, according to which the origin of the name is associated with the the fact of ponting to the Chapel of St. Cross (cro. Kapelica Sv. Križa) on the way to the Town (O, crux!) by the locals, but this theory lacks evidence, as well. However, the origin of the name of the beautiful Mavarčica Bay on the south-eastern side of the Town is rather transparent, being named after the ancient Church of St. Maurice (cro. Crkva Sv. Mavra) which s located at the Bay.

The Bay of Okrug 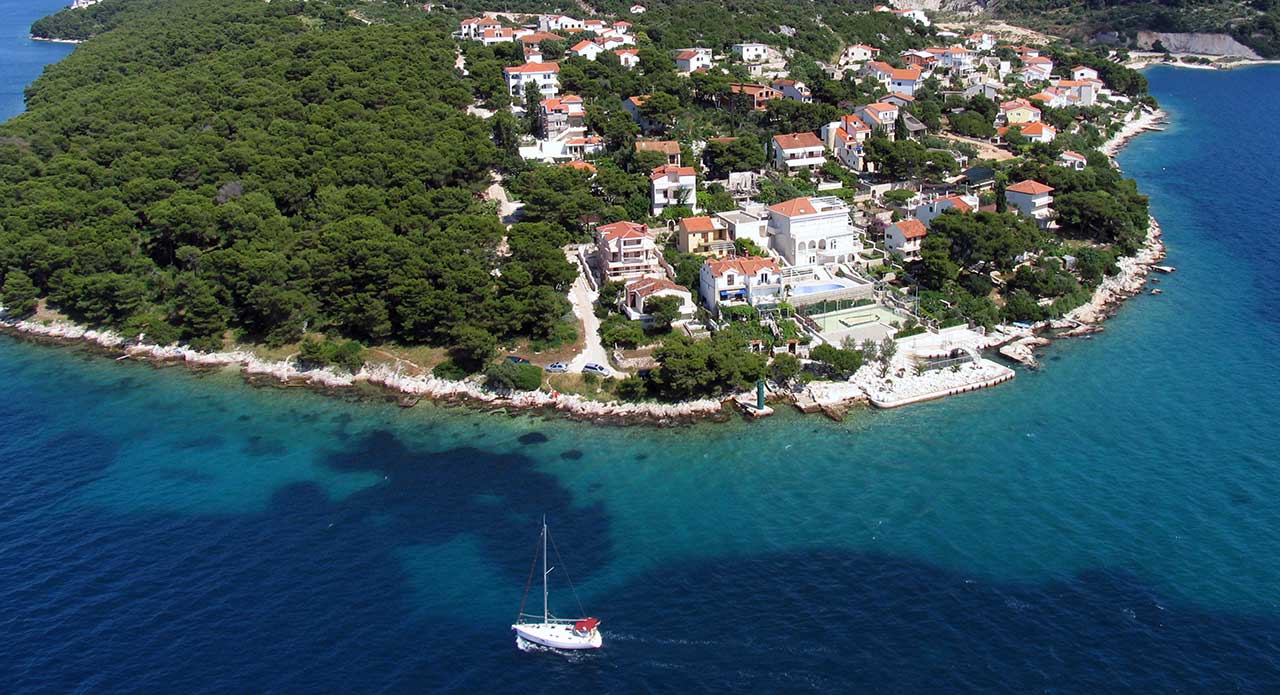 Western promontory of the Čiovo island 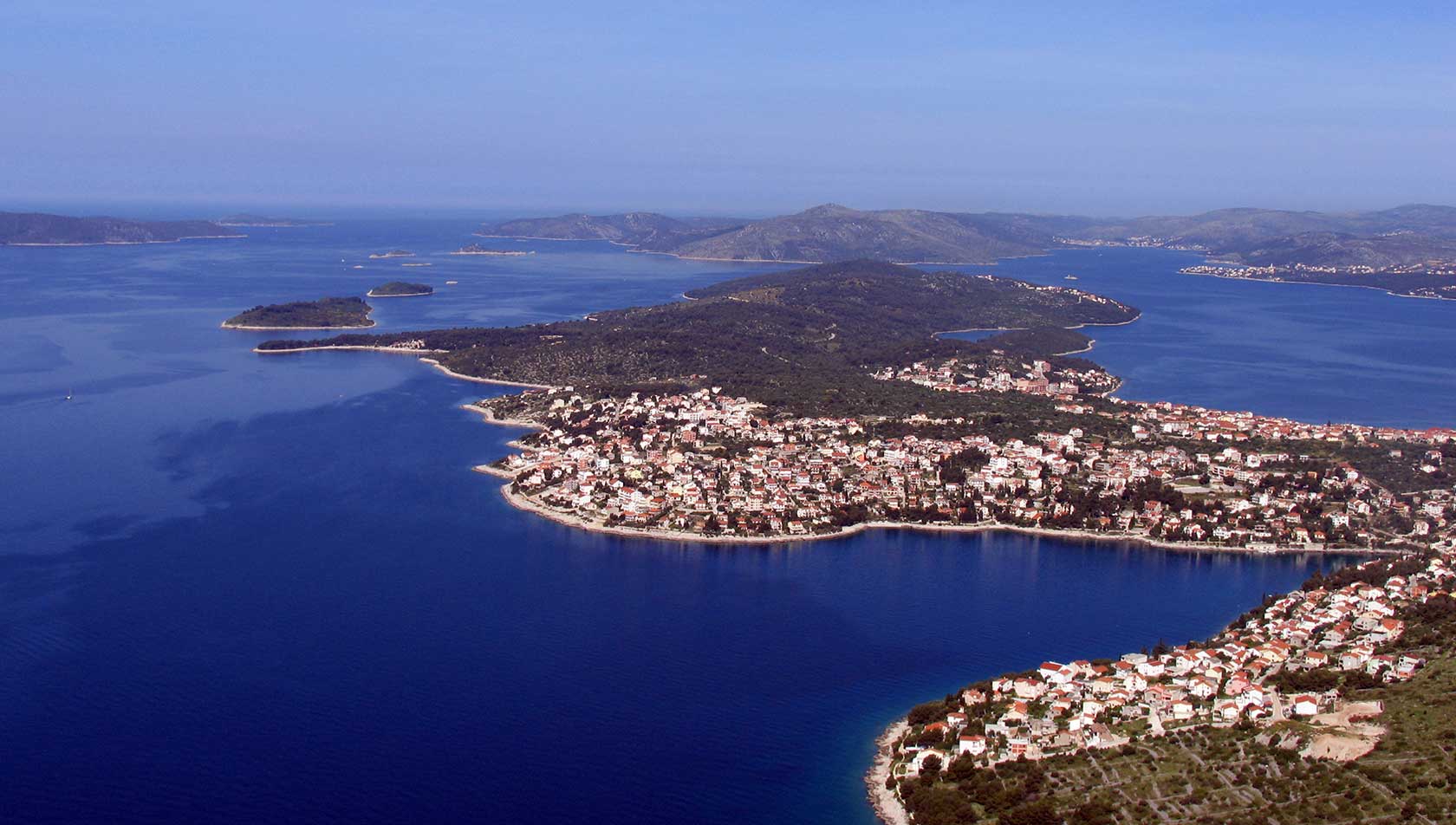